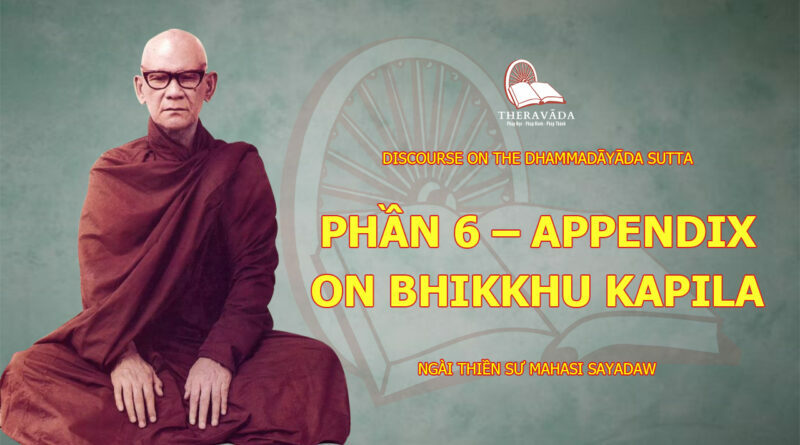 Reference was made above to the monk Kapila and other vile bhikkhus in my discourse on the Dhammadāyāda Sutta. The following is the full story of Kapila as mentioned in the Commentary on the Dhammacariya Sutta of the Suttanipāta.

Because of his knowledge of the Dhamma, he had many followers and was well provided with material goods. Puffed up with conceit over his learning, he became presumptuous and arrogant. He would contradict other monks in everything and when they tired to reason with him, he would retort with abusive language. His brother tried to bring him to his senses, but it was in vain and at last he was deserted by all the fellow-monks who cherished morality.

He did not lead a good moral life nor did his followers. On one occasion at the gathering of monks he called out for someone who could recite Pātimokkha. Nobody was able to do the job. Then saying, “It does not matter whether or not you hear Pātimokkha. There is no such thing as Vinaya rules,” he left the assembly. In this way he did much disservice to the teaching of the Buddha Kassapa.

His brother Venerable Sodhana attained parinibbāna on that very day. As for Kapila, on his death he landed in Avīci hell and so did his mother and sister who had reviled virtuous bhikkhus.

In the lifetime of the Buddha Gotama, Kapila was reborn as a big fish in the river near Sāvatthi because of his residual evil kamma. The fish was of golden colour but its mouth emitted a foul smell. One day the fish was caught and brought to the king. The king took it to the Buddha and asked the Blessed One why the fish had a golden colour but a foul smell. The Buddha described the past existence of the fish as the learned bhikkhu Kapila in the time of the Buddha Kassapa. He told the king how Kapila abused the monks who did not agree with him; how he then did things harmful to the Buddha Kassapa’s teaching, and how as the kammic result of his evil speech he had to suffer and in the animal world. His body had a golden colour because of his effort to promote the knowledge of the Dhamma and the foul smell was due to his diatribes against other monks.

Then the Buddha asked the fish:

“Are you not the monk Kapila?”

“Yes, I am, the monk Kapila, Venerable Sir,”

“From where did you come?”

“Where is your brother Sodhana?”

“He has attained parinibbāna, Venerable Sir”

“Where is your mother Sādhinī?”

“She is in the great hell, Venerable Sir.”

“Where is your sister Tāpanā?”

“She is also in the great hell, Venerable Sir.”

“Where are you going now?”

“I am now going to Avīci hell, Venerable Sir.”

Then the fish died and it landed in Avīci hell. The people who heard the story of Kapila were horrified and the Buddha taught the Kapila Sutta which begins with the following verse.

The Kapila Sutta consists of ten verses (gāthā), and the substance of the Buddha’s teaching in the sutta is as follows.

The Buddha has taught the ten wholesome deeds and the eightfold path as the noble Dhamma. Even though a man has renounced the householder’s life and led the homeless life of a monk, if he speaks rudely and delights in ill-treating living beings, his life is vile and base and it leads to the increase of defilements.

The monk who delights in arguing with others remains steeped in ignorance. He cannot understand or appreciate the true Dhamma that is imparted by a learned person. Because of his ignorance he does not know that it is a defilement leading to hell to make a scurrilous attack on the Arahants who have attained the path and its fruition, to contradict them, to say that they know nothing.

The monk who is blind to such evil lands in the lower realms, passes through one dismal, gloomy existence after another and will undergo much suffering. Just as it is hard to cleanse a big pit that has been full of excrement for many years, so also it is hard for an evil monk like Kapila to purge himself of all impurities.

So the bhikkhus should recognize a monk like Kapila as one who is steeped in sensual pleasure, sensual thoughts, evil practices, and involved in close relations with women of loose character. They should give such a monk a wide berth. They should be united and remove vile, undesirable, and bogus monks like Kapila. After getting rid of the undesirable monk who are given to evil thoughts and evil practices, the bhikkhus should form a community of virtuous monks who live together and practise the Dhamma on the basis of unity, harmony, and mutual respect. In this way they will gain full insight and finally attain Arahantship and nibbāna that is the end of suffering.

This is the full text of the Buddha’s teaching in the Kapila Sutta. According to the Commentary, after hearing the discourse those who had brought the fish joined the Saṅgha, practised the Dhamma and before long attained Arahantship.

“While I was coming down the hill, I saw a monk going in the sky. His robe was burning and so were his bowl and his body. He was screaming with pain. He was a hungry ghost (peta) and on seeing him I was very surprised to see that such a being existed.”

Venerable Moggallāna was greatly moved with compassion for the hungry ghost as well as for all other living beings who would have to reckon with such suffering as long as they remained entangled in the cycle of existence (saṃsāra). He smiled because he knew that he had put an end to all such suffering.

Then the Buddha said as follows.

“Bhikkhus, my disciples have such higher knowledge that they can see such living beings. They are able to bear witness in support of my teaching. I saw such living beings at midnight on the eve of my enlightenment, but I have not told anyone about it before because my revelation would harm the sceptics. Bhikkhus, that hungry ghost was a vile monk in the lifetime of the Buddha Kassapa. As a result of his evil kamma he suffered for aeons in hell. Then as the residual effect of his kamma, he is now suffering with his body in flames.”

The Commentary explains the term vile monk (pāpabhikkhu). A vile monk is one who misuses the four necessities of life — food, dwelling, robes, and medicine that were offered by lay people who believed that they would benefit by giving alms to virtuous monks. The vile monk did not exercise self-restraint in his deeds and speech; he acquired material goods by fair means or foul and gave free rein to his evil propensities. Therefore on his death he suffered in hell and then in the time of the Buddha Gotama he landed in the world of hungry ghosts in the form of a monk.

May you all be able to practise morality, concentration, and wisdom faithfully and gain the heritage of the Dhamma! 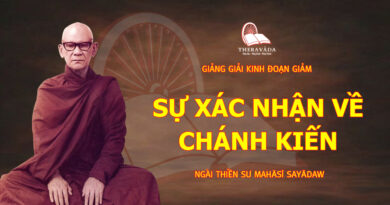 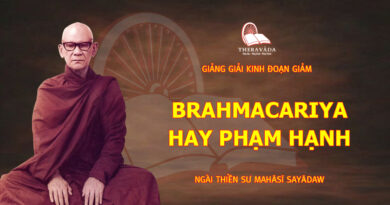 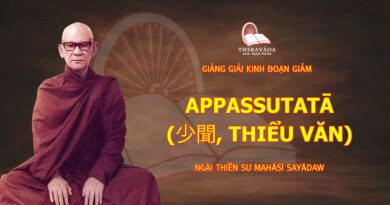 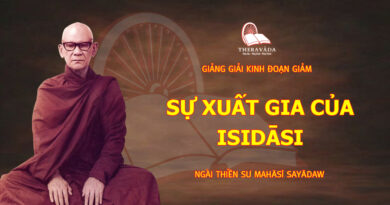