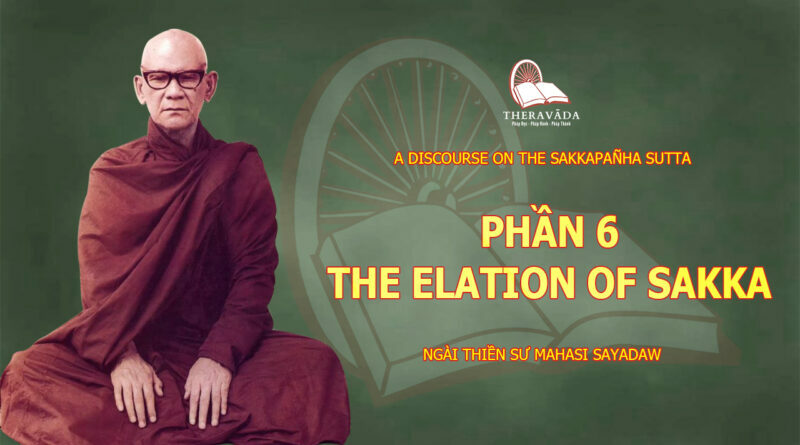 Phần 6 – The Elation of Sakka

– The elation of Sakka

The Elation of Sakka

When Sakka expressed his joy at attaining the first stage of the holy path, the Buddha asked him whether he had ever experienced such joy before. Sakka replied: “Venerable sir, I was once overjoyed at my victory in battle against the Asuras, but that joy had its origin in the clash of weapons. It had nothing to do with disillusionment and it did not lead to special insight-knowledge or nibbāna. But now my joy at the attainment of the Stream-winner stage is not rooted in the clash of weapons. It is bound up with disillusionment and detachment, and will also lead to illumination and nibbāna.”

Sakka went on to say that he was overjoyed because of the six benefits that would accrue to him.

The first thing that made him joyful was his attainment of the Stream-winner stage and the renewal of his existence as Sakka. For his good deeds in his previous life as Māgha, he became king of the devas, and this first existence lasted thirty-six million years by human reckoning. Then seeing that his death was imminent, he came to hear the Buddha-dhamma. While listening to the Buddha’s discourse on wholesome indifference, he practised insight meditation and attained the first stage of the holy path. He was overjoyed at his permanent liberation from the lower worlds and at the prospect of enjoying heavenly bliss for another thirty-six million years.

He will be reborn in the human family of his choice when his life in the deva world has run its course. It is said that the span of life among human beings is now decreasing by one year in every century. About 2,500 years have elapsed since the time of the Buddha and so we have to assume that the span of human life has decreased by twenty-five years. This assumption is plausible since today only a few people live beyond seventy-five years.

Man’s life-span is likely to be reduced to only ten years after the next 6,500 years. It is said that by that time delicacies such as butter, honey, etc., will have disappeared. Good varieties of rice will become a thing of the past, and poor quality grain will become the best staple food.

People will no longer avoid killing, stealing and other misdeeds. Immoral acts will become rampant and nobody will have any sense of moral values. Those who do not respect their parents, older relatives or virtuous monks will be extolled and honoured by many people. Even now there is a trend in some places towards such disregard of traditional values. Moreover, there will be sexual perversions such as incest, and the moral life of mankind will degenerate to the level of animals.

People will become extremely malicious, aggressive and murderous, even towards their own parents and children, and fratricidal strife will mark relationships among brothers and sisters. There will be armed conflicts, followed by a holocaust that will lead to mutual destruction, with men regarding one another as animals. It will then be easy to produce powerful weapons. The possibility of such a holocaust does not seem remote in view of the production of extraordinary weapons in modern times.

Mutual destruction will eventually bring mankind to the verge of total extinction. Only those who do not want to kill or be killed, and who take refuge in forests, will escape death. It will be hard for these few survivors to meet one another, and they will do so only after travelling great distances. As a result they will love each other, and will abstain from killing and from other evil deeds. This will lead to a gradual increase in man’s life-span, and people will again do good, avoid evil and enjoy longevity. As Sakka’s rebirth in the human world will take place in that developing era, he will associate with good people.

Sakka says that he will be conceived in his mother’s womb with full awareness. This shows what naturally happens to a Stream-winner in his passage from one existence to another. Obviously a deva’s mind is clear and serene at the moment of death because he dies without suffering. Likewise he will not be confused when he is in the womb of his human mother. The human Stream-winner, too, dies without delusion. He may be afflicted with physical pain but his consciousness is clear and normal. Although he is unable to speak, he usually dies with his mind free from delusion and obscurity. Sakka is happy because he will die peacefully and pass on to the human world to be reborn in the noble family of his choice.

Sakka says that it will give him great pleasure to live by the teaching of the Buddha. If the span of human life is to decrease by one year in every century, it will be reduced to ten years at the end of ninety centuries. Suppose a great part of the human race were to be wiped out by a nuclear war, Sakka would be only nine thousand years old and would continue to live more than thirty-five million years. The average man’s life-span would then be hundreds of thousands of years.

In view of the prediction that the Buddha’s teachings will persist for only five thousand years, and that there will be mass destruction at the time when mankind has a ten year life-span, it has to be assumed that Buddhism will have become extinct by the time of the global conflict. There will be nobody who has memorised the Buddha-dhamma, nor will there be Buddhist books and scriptures. Inscriptions from the Piṭaka may still exist in Burma but there will be no one who can teach the Dhamma. However, since Sakka is a Stream-winner, the Dhamma will remain fresh in his memory as it will for all other Noble Ones. Therefore, although Buddhism will be unknown to the majority of people of that time, it will continue to be a living force for the man who is Sakka incarnate. He will observe the five precepts, understand impermanence, unsatisfactoriness and not-self on the level of a Stream-winner, and overcome some defilements. In other words, he will continue to be a dedicated disciple of the Buddha.

A Stream-winner in the immaterial world (arūpaloka) will not forget to practise mindfulness. He or she can contemplate the mental processes and attain Arahantship. He may be in the rūpavacara-brahmā world during the lifetime of the next Buddha, but, as a disciple of the former Buddha, he will become an Arahant and attain nibbāna. These Stream-winners do not become disciples of the succeeding Buddha, but practise insight meditation as disciples of the former Buddha. This is evident since some former disciples of the preceding six Buddhas identified themselves during the visit of Gotama Buddha to the Suddhāvāsa realm. So it is pointless to pray for Arahantship under the guidance of another Buddha if one has already attained the Stream-winner stage within the former Buddha’s dispensation.

Sakka also says that while living by the Buddha-dhamma, he will always be mindful. He will continue to practise mindfulness just as he is practising now. This prospect affords him much pleasure because he is thus assured of the successive attainment of other insights.

Sakka says, “Venerable sir, if through the right practice of insight meditation I attain sambodhi, I will try and contemplate to attain higher insights. The sambodhi that I attain as a human being will mark the last of my human existences.”

Here sambodhi means the three higher stages of insight. However, later he says that he will again become the king of the gods, that after attaining the Non-returner stage in his present life he will pass on to the Suddhāvāsa realm, and that finally he will attain Arahantship in the Akaniṭṭha realm. In view of these statements, the Commentary holds that sambodhi refers to the insight of a Once-returner.

So Sakka will be at the Once-returner stage when he passes on to the human world. It will be the last existence in which he is bound up with old age, sickness and the other sufferings of human life. This is the fourth reason why he is joyful.

Sakka says that, after his death in the human world, he will again become the highest god (uttamo devo) in the celestial worlds.

According to the Commentary, he will become the chief deva of Tāvatiṃsa heaven. So, if he has to pass through a single life-time as a human being, the human life-span must be the same as that of the devas in Tāvatiṃsa. Sakka incarnate on earth must be as old as a deity who holds the office of the king of the gods, in other words, he must live for thirty-six million years.

Alternatively, the Stream-winner Sakka may pass through several lifetimes. In that case what are we to understand by the seven lifetimes of a Stream-winner? Here Sakka’s rebirths in the human world should be understood in the same sense as that of a Non-returner. The Non-returner is said to be subject to a single rebirth. He may be reborn up to five times in the Suddhāvāsa realm, but since this takes place only in the material world and has nothing to do with the sensual or immaterial (arūpa) worlds, we may say that he is reborn only once. Likewise, Sakka may be conceived many times in the human world, but as his rebirth is restricted to human existence, it may be regarded as a single lifetime on earth.

Sakka was overjoyed at the prospect of attaining the Once-returner stage as a human being, and at his rebirth as the king of the gods.

Sakka says, “The Akaniṭṭha world is so called because there the devas are endowed with power, wealth, longevity and other qualities. They are the noblest devas. I will have my last existence in that superior world.”

Akaniṭṭha is the highest of the five Suddhāvāsa worlds. Although its inhabitants are called devas, they are in fact brahmās. Presumably there are many brahmās since each is said to have many attendants. Sakka will be a Once-returner on earth, and a Non-returner in the deva world, where he will pass on to Aviha, which is the lowest of the Suddhāvāsa worlds. Then after passing through other celestial worlds, he will reach the Akaniṭṭha world where he will attain nibbāna.

According to the Commentary, Sakka will be in the brahmā world for 31,000 world-cycles. There are only two other individuals, Anāthapiṇḍika, the merchant, and Visākhā, the great female disciple of the Buddha, who will enjoy the same longevity in the brahmā worlds. Thus Sakka, Anāthapiṇḍika and Visākhā have no equal, in respect of the high quality of their lives, among beings subject to rebirth.

So the sixth cause of Sakka’s joy was the prospect of attaining nibbāna in the Akaniṭṭha Brahmā world. Then Sakka concluded his statement to the Buddha as follows.

Then Sakka uttered three times: “Namo tassa bhagavato arahato sammāsambuddhassa” and joyfully bowed before the Buddha. Here arahato means “worthy of honour” and Sammāsambuddho means “One who knows the four noble truths by himself.”

This is the end of the Sakkapañha Sutta. The discourse has enlightened many living beings, as it did Sakka and many other devas. Those who study and apply its teaching will certainly attain unusual insight knowledge on the noble path. 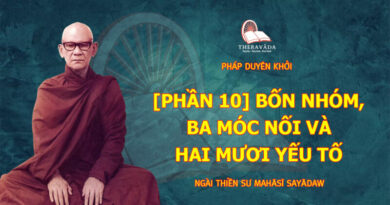 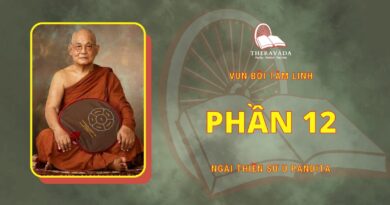 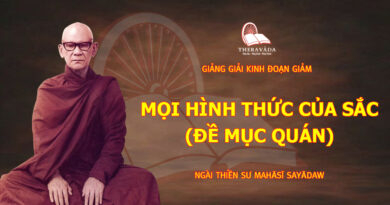 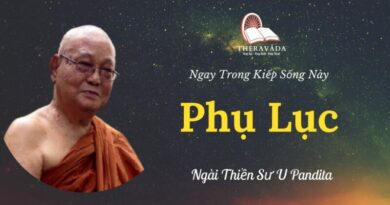 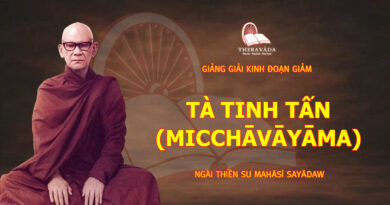 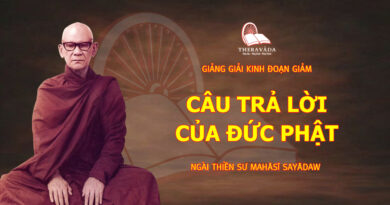